We have a new prototype that we are eager to test in Niger. We believe our latest prototype resolves the issue of clogging and output speed. Still solar powered, it is a simpler and more compact machine lower energy consumption than the AF2 (the prototype we tested in Niger in 2015).  The “crop engagement element” consists of two sets of rotating v-shaped wire flails, which the panicle goes in between. This eliminates the need to rotate the panicle and takes the grain off much faster than in any previous prototypes.

The grain and florets are knocked into a chamber, where secondary threshing occurs. The grain drops out of the bottom, and any chafe is ejected out the top. We see opportunities to incorporate decortication into the process as well as making the machine also effective on sorghum.

Since 2006, a team of designers based at Hampshire College in Amherst, Massachusetts have worked to develop an affordable and labor-saving pearl millet thresher that complements existing social and cultural dynamics of the people who use it. Over these past years, numerous individuals and organizations have provided ideas, financial and technical support, and help with field testing.

The crop and its challenges

Pearl millet is is a highly nutritious staple cereal, produced on small farms by millions of people in sub-Saharan Africa. The plant requires no irrigation and can grow in the harshest conditions.

But threshing and separating the edible grains from the panicle is a slow and labor-intensive process. Practices vary by region and ethnicity of the farmers, but in general women do the work of extracting the grain by hand, with repeated cycles of pounding and winnowing. The photo at left was taken in Niger.

Pearl millet comes on a stalk called a panicle. On the panicle, seeds are held in place by a glume – a group of tentacles holding the seed in place. The seeds, in their glumes, are held in groups of three. These groups are called florets.

With a grain like wheat, you can just shake the stalk and the grain falls off. With pearl millet, the whole floret falls off. You either need to rub or strike the panicle to knock the seed out. It’s different from most other grains in that way: it just doesn’t come off easily.

An additional challenge of this project is that pearl millet varies widely in its shape and physical behavior based on land race and growing conditions. For example, Namibian pearl millet panicles are much thicker than those available for experimentation in Massachusetts, and Nigerian panicles are much longer.

When the time and energy cost of threshing and winnowing the millet is reduced, it also reduces the health burdens and stress placed on the women responsible for the task. We aim to make a thresher with a low cost and simple design, in order to make a universal improvement to the processing of an important and nutritious crop that has the potential to improve global food security.

Our style of thresher, which we call “Pearl Millet High-Impact Thresher (pm HIT),” uses sharp force to remove just the edible grains from the stalk, while leaving the rest of the panicle intact. This largely eliminates the need to winnow and produces clean unbroken grain.

The current prototype of our thresher, pictured here, is called the Ant Farm. It uses a fan inside a specially shaped wood-and-plexiglass case to knock the millet off the panicle and deposit it into a receptacle beneath the thresher.

We learned from the 2014 trip to Niger that the threshers we’d built so far were inadequate for their pearl millet. There was significantly more variation in the panicles than there was in the millet we used for testing in Massachusetts.

We realized that we needed to incorporate some amount of winnowing into the process, so that the thresher would produce clean grain.

The Ant Farm 1 was our prototype for solving that problem.

This design was one of our many attempts to create a secondary friction action: By using the fan as both a hit surface and a fan, we were able to put more kinds of impact into the process. This helped separate the millet from its florets even when the florets were dislodged from the panicle. The screen under the fan then prevents the millet from passing through until it has been knocked loose from the floret.

We knew this configuration could be hand cranked, but to make the testing process easier we decided to motorize it. After making that switch, we decided it would be worthwhile to build the device primarily to use a motor.

We built on this design to bring to Namibia for field testing. In Namibia people generally thresh their whole crop at once, so going in we knew it wasn’t going to be an ideal solution for their approach to threshing. But it was an opportunity to test it with a bunch of pearl millet that was closer to the kind found in Niger.

We saw that testers weren’t using a fully charged battery, so the thresher didn’t work as well as it did in the shop. This was one of the significant lessons we took away from the Namibia trip, and building on it we decided to use solar panels for the next iteration: the Ant Farm 2 can be plugged in, but its main power source is solar, so it never needs to be recharged.

One of the interesting things we found in Namibia was the business model that had emerged for threshing. A businesswoman had invested in a $6,000 diesel thresher that could be pulled by a car, and she would hire it out to the different farms and thresh their season’s crop in a very short period of time: a matter of minutes rather than hours. The only complaint was that people had to wait for her services.

This business model is applicable in some situations but is not feasible for very poor farmers, and is incompatible with the approach in Niger of storing millet on the panicle and threshing it daily as needed.

The speed of our thresher emerged as a concern in that context. In Namibia, where the people had access to a diesel thresher, the speed of the Ant Farm was completely unacceptable. But in Niger they thresh small quantities on a daily basis, so the Ant Farm only has to compete with manual threshing, not a large-scale thresher.

Team members Susan Hanna and Roo Trimble were in Niger from November 3 to 14, 2015, field testing the most recent version of the HIT. They started off the trip accompanied by Nat Bascom, the assistant director of the Feed the Future Innovation Lab for Collaborative Research on Sorghum and Millet (SMIL). In Niger, they workedclosely with Moustapha Moussa of National Institute of Agricultural Research of Niger (INRAN) who arranged visits to villages, local industry, university and labs.

In the trip we sought authentic feedback from the women farmers and their families on the most recent iteration of the High Impact Thresher known as the AF2. The name “AF2” is an abbreviation for “ant farm”, which is resembles with its interior workings and passages visible between clear polycarbonate plates.

The machine is simple and easy to understand, compelling to watch as the grain is knocked off the panicle and flows through the machine into the hopper below. The AF2 is powered by two 50 watt photovoltaic panels and and has a hopper style grain collection system where the accumulation of grain can be seen. Our preliminary testing indicated that the AF2 accommodates the longer and more delicate panicles typical in Niger, and be easier to use than the hand cranked and bicycle powered prototypes we introduced during our November 2014 visit to Niger.

Emails and Images from Niger

INRAN has provided 2 women from the lab and several men in addition to 2 drivers, 2 cars and Moustapha! This for each field test. They have been taking pics and video, doing focus groups, asking survey questions and recording all data in addition to ours. Absolutely amazing! Slight change in plans for tomorrow. We will come back to Niamey at night and go to speak with US AID about importing millet to US and then back to Boki to finish testing and data collection. Not sure if we’ll be able to call but if we can then we will try the classroom number. Hope to speak to you all then. 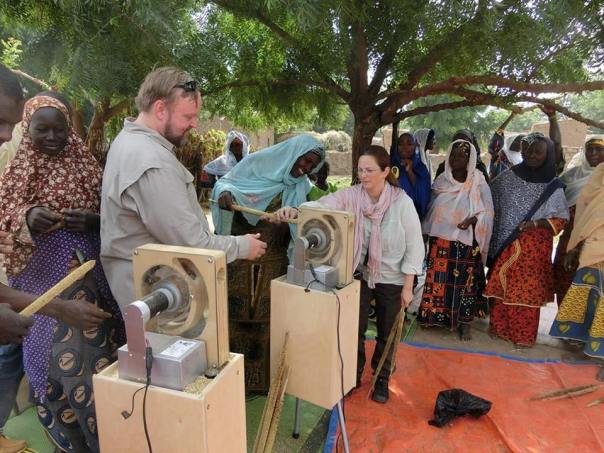 What an amazing day. We’re thoroughly exhausted! We went to the village of Yerimey Day Gorou today and spent the day demonstrating and teaching how to use the AF2. It went remarkably well and by the end women and men and CHILDREN were lined up to thresh! Very cool to watch. We had our “races” between traditional methods and AF2 and we were the big losers in terms of time and seed breakage! The good news though was that people seemed to enjoy using the ant farm while having many negative things to say about the traditional methods.

One very important thing about the ant farm that  observers noticed is that everyone in the household could use it and that would allow the women more time for other chores. Currently, if a woman is sick or not strong enough that generally means there is no daily meal…but they could imagine that sharing the threshing and winnowing could bring a welcome and significant change.

The pearl millet here is very different than the pearl millet we’ve tested back home. Here is a great deal of variation – so our task is to make the thresher less aggressive and prevent it from clogging as so much chafe is coming off many of the panicles. We are also investigating ways to import millet into the US. Everyone we’ve met at INRAN has been full of ideas and incredibly helpful. Btw they told us they need a cassava peeling machine, cassava fryer plus a small millet and sorghum flour mill to attach to the ant farm and a mechanized way of sowing seeds so get your thinking caps on!!!

So that’s our preliminary data. We return there on Sunday to see how things went with the thresher while we were gone and to collect data which Dr. Germaine Ibro of INRAN helped to adapt and translate.

All in all an excellent start. Two more villages to go after this! Hope you’re all well. We’ll try to keep you posted as wifi allows.

This is a rough cut of the images and video from the 2015 Niger trip. Not all of the data has come back, and we’re working on some more organized presentations, but this is the version that Roo and Susan have been using to accompany presentations summarizing their experience in Niger.